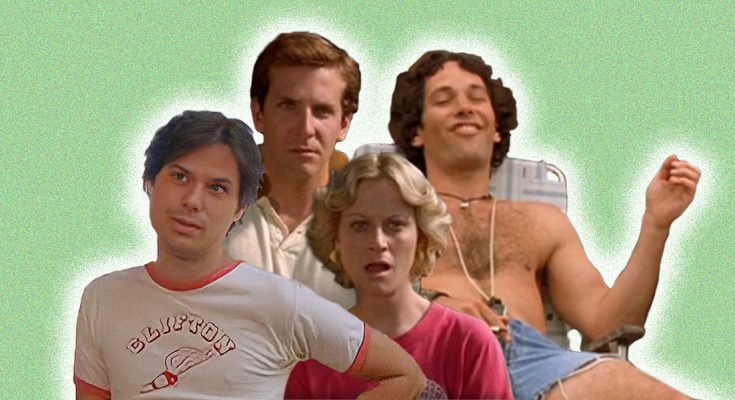 They’re the perfect mix of authority and untouchability. They’re effortlessly tan. And they will forever be your unrequited love

In the 2001 spoof of 1980s summer camp comedies, the traits one expects from a camp counselor are intensified for the sake of the comedy. Our counselors met by “the lake” (always “the lake,” as if any camp’s lake was the only one in the world) to drink beer; Wet Hot American Summer’s counselors jaunted into town to do heroin and rob old ladies together. Our counselors taught us a few outdoor skills while the movie’s counselors saved their campers from apocalyptic peril in the form of a meteor. Even that title is extra-titillating. I already knew with a child’s confidence that my counselors were the sexiest people in the world. When Wet Hot American Summer came out, its title so horny that my parents wouldn’t say it out loud, I realized I wasn’t the only one who knew.

Camp counselors are a few years older than you, and you’re inexplicably put in their hands with minimal oversight once a year. They teach you how to perform physical feats like shooting a bow and arrow or piloting a kayak, sometimes by putting their hands on you to correct your form. They aren’t necessarily tan, but probably. They glow, in any event, with all the hale and hearty vigor of people who spend most of their time being athletic in the sun. They mediate the fight, they kill the wasp. They know they’re meant to be in charge of you, and so they imitate adult authority as best they can. But because they’re so young, their imitations take on an uncanny quality that only makes them more alluring. It’s hard to exercise adult authority while wearing a camp uniform and capturing a flag. You obey your parents and teachers because they can wield real power over you if you don’t; you obey a camp counselor because you’re in love.

At the same time, we campers can smell the intrigues our counselors are involved in that don’t include us. I imitated these intrigues as best I could with my own summer romances, but even then I recognized that one tantalizing level above me was a far tastier version of the experience. Campers kissed, but counselors were doing something more high stakes, something I couldn’t identify until I knew what sex was — and once I could identify it, it was all I could think about. Did anybody else resent their pockmarked, brace-faced summer paramours for not being 17 and fit and tan? Counselors were close enough to fantasize about, and yet completely outside the realm of romantic possibility, which made them the only romantic possibilities worth caring about. No wonder we campers all yearned to be counselors ourselves someday: We saw in them that flash of the unattainable, and nothing would do but to attain it.

As is the case with all jobs these days, there’s a fun little block of TikTok where camp counselors rave about how wonderful it is to be a camp counselor. The #campcounselor hashtag is a recruitment tool that the U.S. Army would do well to study. It made me want to be a counselor, although a 30-year-old counselor, that’s just gross — I’m firmly in my camp director years.

Interestingly, the archetype seems to have changed little in the nearly two decades since I was a camper myself. On TikTok, camp counselors are still cool and goofy and invariably tan as they extol the incomparable virtues of getting up early. They pose in cozy twos and threes; they dance happily on camera; they’re the embodiment of FOMO, and your non-counseling ass is missing out. They describe everything from rafting to CPR with the same breathless enthusiasm. They’re the exact opposite of all the pallid, stoic drug users I’ve dated ever since my camp years ended. Failing to score with one’s counselor is an inevitable and embittering experience that we all heal from in our own ways.

Of course, nothing is inherently sexual about a camp counselor — which is why everything is. The most important aspect of crushing on one’s counselor (or babysitter, or sibling’s boyfriend) is that it’s supposed to be totally safe. That’s not to say that unscrupulous counselors never take advantage of their position to hurt children. But counselors are presented to their campers as safe figures, a designation that kids tend to trust. Their closeness and unthreatening nature allow us to engage in thrilling thought experiments: what if I were just a little older; what if I could figure out a way for us to be alone together. That the experiments will never be more than thoughts is what makes them so intoxicating.

In Wet Hot American Summer, there’s a gag in which camp counselor Andy is so engrossed in making out with counselor Lindsay that the kid jet-skiing behind the boat Andy’s driving drowns. On rewatching it, I laughed at the joke. But watching it for the first time as a tween, I thought, I can see myself doing that, no problem. A horniness that left death and destruction in its literal wake was a horniness I understood completely.

Fortunately, the eroticism of camp counselors exists for only as long as one’s youth and inexperience do. My love for them was designed to self-destruct as soon as I went to college where the attainable love was. But until then, they teach you rock-climbing and how to desire, both in low-stakes settings where you’re unlikely to go home with more than a scar on your leg or your heart.

At least for me, without a good, hearty, unrequited love in my back pocket, I could never have loved properly at all.