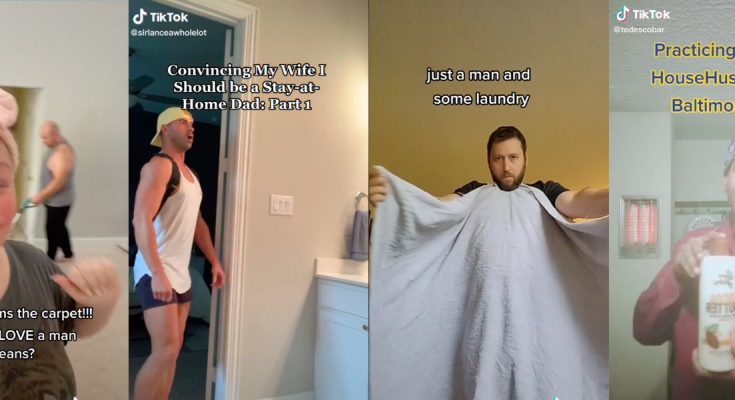 TikTok isn’t kind to housewives, but househusbands are overwhelmed with compliments and adoration. Is their domestic glee really about ‘ending the patriarchy,’ or is there something else at play?

If you say that you want to be a housewife on TikTok, you’ll likely be met with dozens of comments about how you’re setting women back or how it’s irresponsible to rely financially on a man. But if you flip the gender roles and say you want to be a househusband? Well, that’s one of TikTok’s favorite genres.

Across the app, there are dozens upon dozens of guys talking about how quick they’d put on an apron and start sweeping if they had a partner who could be the primary breadwinner. “Would you still work if your wife made a seven-figure salary?” one viral TikTok asks, showing the creator responding to the question by setting up a Roomba and modeling himself after the manga series The Way of the Househusband. Another says, “POV: Me taking care of the house while my wife makes 100K a month” and shows a guy dancing as he cooks over a stove.

The TikToks under the #househusband hashtag generally sell this fantasy of how happy a guy would be maintaining the home and doing the cooking if his wife was making enough money. Some call for extremes like the aforementioned seven-figure salaries, while others say they’d be content with their partners making a more “reasonable” $100K a year.

Though some TikToks are purely hypothetical, asking whether a guy would do this at all, other videos come from guys who are actually living the lifestyle. One current househusband documents himself making his wife’s coffee, doing her laundry and delivering her breakfast to her work-from-home desk. “Follow to end the patriarchy,” he concludes. His comments are filled with women commenting on how attractive his actions are, as though it comes as a surprise that a man would be committed to taking care of the household in the same way women are often expected to despite also working a job themselves.

Most also emphasize the domestic labor of being a househusband and seem to understand the full-time nature of the gig, but some glorify the idea that it’s mostly a life of leisure. “When she’s gonna be a CPA so you can be a Tesla driving, Lululemon-wearing golfing-all-day-husky-caretaking househusband,” another TikTok says, showing a guy dancing around his wife.

But whether the TikToks center around the actual work of being a househusband or the myth that it’s all relaxation, these TikToks still support the same general conclusion: Almost anyone would stay home and not have a job if they had that choice. These videos are often framed as some sort of male feminist reclamation or as something worth praising, but they’re fundamentally no different than any of the TikToks in the #housewife hashtag. In both, we’re presented with couples who have the financial means of allowing one person to stay home to commit themselves to cooking, cleaning and taking care of their family. There ultimately needn’t be anything gendered about it.

And yet, there’s a noticeable difference in the attitudes toward the housewife community versus the househusband. Househusbands, for example, are never warned of how they ought to have a degree under their belt, how they should hope they have some sort of safety net if their wife leaves or told by fellow men that it seems like a nightmare. Instead, they just get to do their little dances clad in aprons.

Shouldn’t everyone have the right to want the same?