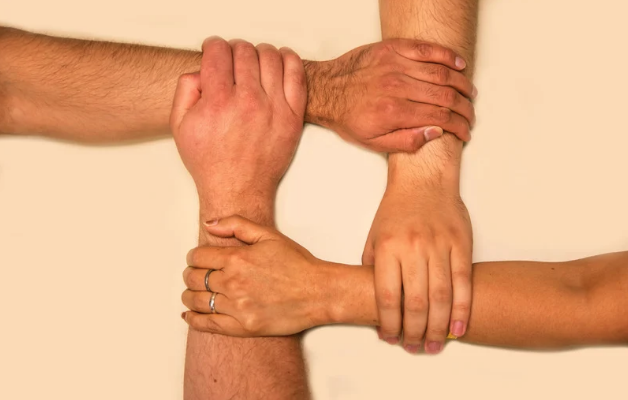 Every day we wake up to a world that seems hopelessly divided. It feels like we’re tearing ourselves apart. No one wants what we have, but we seem helpless to make things better. Many have just given up and escape into a world of make believe where we pretend that everything is fine while inside we become increasingly stressed, depressed, and sick in body, mind, and spirit.

I’ve been a marriage and family counselor for more than fifty years. Every day I work with men and women whose relationship is falling apart. Sometimes the couple comes together for help. Most often it is one member of the couple who reaches out for help. The other member is either in denial or so afraid that they will be blamed for the sorry state of the marriage that they withdraw into their own world of pain and suffering.

Before we can recover from one mass shooting, we are forced to deal with another one. No one wants the killing to continue but the great divide between the left and the right keeps any meaningful legislation from being passed. Legislation that has been passed assuring a woman the right to an abortion when necessary, has now been overturned. We continue to heat up our world and watch helplessly as our life support system on this one magnificent planet continues to deteriorate.

When people are frightened they naturally gravitate to their in group where they feel safe. It’s part of our evolutionary journey that goes back 2 million years. We want to be with others like us. But the problems we face can’t be solved by us alone. We need them. Throughout evolutionary history we looked to the out group for potential marriage partners, to trade for goods we couldn’t find in our local area, and to form alliances for increasing wealth and well-being and to protect against other groups.

But the out group could also be a source of danger. They might carry diseases that could sicken or kill us. Their group or tribe, particularly the males, might take what is ours—women, children, food, land. We need them, but we are also afraid of them.

“When fear takes over it becomes all too easy for the other to become The Other, and then The Enemy, and then The Inferior or The Demon,”

This built-in ambivalence was also true for relationships between men and women, husbands and wives. We needed each other for mutual support and affection and to create children that would enable the survival of the species. Yet, men and women, also had different evolutionary needs that were sometimes in conflict.

It wasn’t that long ago that us and them could work things out. Republicans and Democrats conflicted, but could also compromise and make decisions for the good of the country. Now the other side is seen as the enemy. Rigid lines are drawn and anyone crossing the line is viewed as a traitor.

Fortunately, there is a way out of our dilemma. Every day in therapy I help couples who seemed deadlocked. Healing can happen within a marriage. It can happen within political parties, countries, and between the human species and the rest of the natural world. Here’s what we need to do.

When we go through major transitions it feels like something in us is dying. Yet, there is also something being born that may not be clear for some time. As the Czech statesman, playwright, and former dissident, Václav Havel so presciently recognized,

“Today, many things indicate that we are going through a transitional period, when it seems that something is on the way out and something else is painfully being born. It is as if something were crumbling, decaying, and exhausting itself, while something else, still indistinct, were arising from the rubble.”

In order to be able to become a butterfly, the caterpillar has to fall apart completely, decompose down to its very essence, devoid of any shape or consciousness. It literally dies. There is nothing left of it. What the caterpillar calls death, the butterfly calls life. It helps tremendously if we can recognize the bipolar nature of transformative change.

Many spiritual traditions help people deal with the fears we all have about dying or being overwhelmed by the pain of love ones who die. None of us can avoid death and embracing the future we want to create, what my colleague Charles Eisenstein calls, “the more beautiful world our hearts know is possible,” requires great courage and humility. Accept that birth can be painful, but also wonderful and hopeful.

When we hope for a better world and then see evidence that things are getting worse it causes many of us to feel stressed and depressed. We either try to escape into a world of fantasy or become immobilized with despair. During the darkest days of his countries challenges, then President Václav Havel said,

Once we disengage hope from getting a specific positive outcome, we can do what we need to do because it is worth doing.

We all have fears of facing a challenging world alone. We intuitively recognize that we are social beings. We evolved as small tribes in environments that were dangerous. Being cut off from the tribe was a sure death sentence. In times of danger, we naturally reach out for friends and allies. Yet, in our modern world more and more people feel lonely.

According to a 2018 report by the Henry J. Kaiser Family Foundation, 22 percent of all adults in the US say they often or always feel lonely or socially isolated. That’s well over fifty-five million people—more than the number of adult cigarette smokers and nearly double the number of people who have diabetes.

In his book, Together: The Healing Power of Human Connection in a Sometimes Lonely World, Vivek M. Murthy, MD, the 19th Surgeon General of the United States, says that loneliness is the root cause and contributor to many of the epidemics sweeping the world today—from alcohol and drug addiction to violence and depression and anxiety.

“human relationship is as essential to our well-being as food and water. Just as hunger and thirst are our body’s ways of telling us we need to eat and drink, loneliness is the natural signal that reminds us when we need to connect with other people.”

Historian Howard Zinn reminds us that

“We don’t have to wait for some grand utopian future. The future is an infinite succession of presents, and to live now as we think human beings should live in defiance of all that is bad around us, is itself a marvelous victory.”

In her book, Who Do We Choose to Be? Facing Reality, Claiming Leadership, Restoring Sanity, Margaret J. Wheatley says,

“We are not the first leaders to be stewarding a time of disintegration, fear, and loss. But none of us has been prepared for where we are.”

Wheatley herself a practiced leader and spiritual warrior says,

“The Warriors are armed with only two weapons: compassion and insight. They are peaceful warriors vowing to never use aggression or fear to accomplish their ends.”

My Aikido instructor, Richard Strozzi-Heckler who taught awareness disciplines to the military, offered these thoughts in his book, In Search of the Warrior Spirit:

“The ancient warrior archetype—one who embodies compassion and wisdom, as well as the ability to take effective action when necessary—is the model to bring sustainable peace and balance to humans and an endangered planet.”

These are challenging times which are calling us to come together with others, to become the warriors that are needed today.

“Throughout time, warriors arise when the people need protection,”

“A sense of honor and strong ethics appear among those few people who, at the end of the cycle, seek to alleviate the suffering caused by collapse, not with violence but with compassion and insight.”

Do you hear the call?

I look forward to your comments. If you’d like to receive other articles and join our newsletter you can do so here. Learn about our Moonshot Mission for Mankind and Humanity, here.

The post Across the Great Divide: Healing the Conflict Between Left & Right, Male & Female, Us & Them appeared first on MenAlive.