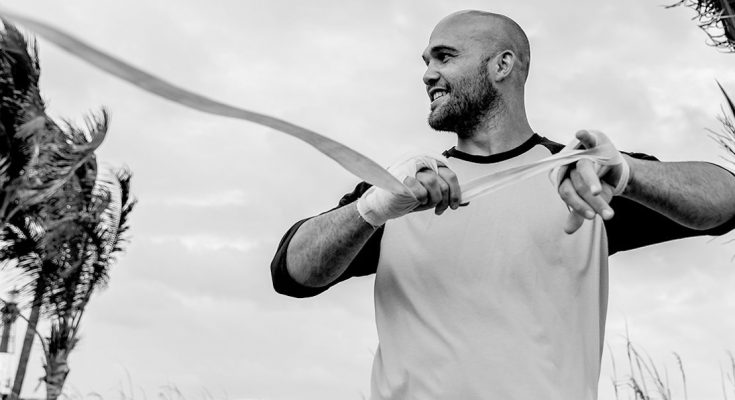 Robbie Lawler is a decorated MMA star and a much beloved fighter, and with a successful 20-year career and a solid 29-15-0 record behind him, the “Ruthless” one is still enjoying the grind. Case in point: on July 3, at UFC 276, he’ll take on Bryan Barberena, an opponent seven years his junior.

Muscle & Fitness sat down with the former UFC Welterweight and EliteXC Middleweight champion at his home in Parkland, Florida to find out the secret behind his constant calmness and the motivations for continuing to fight and train at such an elite level.

“Every day is my birthday,” says Lawler in regards to turning 40 back in March. There was no big party, and why would there be? “Every day is Christmas; every day is sunny. Life is good,” he beams. Still, having been an MMA mainstay for more than two decades, what gets him out of bed in the morning? “I enjoy training, so it’s something I’m gonna do after I’m done fighting… I’ll figure out something else to compete in, but I enjoy the preparation,” says Lawler. “I enjoy the discipline of going in, working out, and doing those things. I take care of myself. I’m gonna continue to do that into my later stages of life. That’s what I do. I take care of myself, I work out, I’ve been doing it for as long as I can remember, so it’s just kinda second nature.”

Has the MMA legend’s perception of success changed from back when he first broke into the sport? “Yeah, definitely. Living and learning. I’ve created more balance now than I had when I was younger,” he shares. “When you are younger, jeez, you buckle down and just concentrate on certain things but as you get older you start realizing that there’s more out there than just this or that. [Age] opens your eyes and you start to realise, ok, how can I create a little bit of balance where I can be a little bit more relaxed but more or less take advantage of everything that’s out there in life.”

For Lawler, the key to finding that balance has been to stay consistent while life creates welcome distractions such as family. “Time management has never been my strong suit because [when I was younger] it was just easy, like, everything revolved around training and if I needed to rest I’d rest or I’d just train all day,” he says. “Now it’s like, I need to figure out how to spend time with my family. I’ll go into the gym and If I’m not training then I’ll help other guys out. I need to take care of my dogs, like those types of things that I really didn’t focus on at all. There’s business stuff, interviews, it’s definitely taxing, it can be, but just finding that balance and enjoying it, it’s part of the evolution of life, I guess. My life, for sure.”

Lawler is admittedly calm most of the time, but far from being lackadaisical, his relaxed demeanor comes from knowing that he has all of his ducks in a row. “I’m pretty laid back about stuff,” he shares. “But sometimes you just gotta stay on top of things and make sure you are doing what you are supposed to and even though you are laid back, you still have deadlines and stuff you need to get done during the day.” Fortunately, the only mixed martial artist to have won three consecutive Fight of the Year awards from both Sherdog and MMA fighting has learned to accept the support of others when it comes to getting things done.

Robbie Lawler has learned to focus more, and micromanage less

“I have a lot of good people around me,” he says. “My wife does a great job of making my life easier. My fight team does a good job of preparing me for these fights. My management takes care of whatever they need to, so I have my pieces in place so that I can relax. More or less, it’s allowing everyone one to kind of do what they do to make my life easier, whereas before [I tried to] micro manage. There’s a reason you have all of those people around to specialize in what they do, and take a little load off you.”

With a support system in place that allows Lawler to put his all into the preparation of each fight, the welterweight is able to remain highly self-motivated. “I’m really disciplined, and I’ve always been into fitness, so I am always reading [and asking] how can I get better?” He says. “How can I improve my health, just to keep my body guessing and healing.” Just over a week out from his fight against Barberena in Las Vegas, Lawler is doing intermittent fasting for 16 to 18 hours per day. “Sometimes you do without, and it makes you stronger, and I do that. And sometimes overdoing it helps too. It could be working out; overdoing it or overeating, and seeing what your body does with the food, so it’s just tricking your body and seeing what it can do.” When it comes to supplements such as energy drinks, Lawler says that they have to taste good, or he finds them to be a real chore. The fighter says that Kill Cliff is his preferred brand because they offer clean fuel for energy while ticking his box for taste. “And, what’s cool about their energy drink is that they use green tea and some ginseng so you don’t get that crash like you would off other energy drinks,” he says.

Making sure to make the weight, “Ruthless” will do his first workout of the day fasted: he will go for a run or a hill sprint for 35 to 40 minutes, then he’ll jump straight into a weightlifting session. “It’ll be like 70% to 80% of my max, but super low reps, just getting those muscles firing, and a little bit of explosive work,” he shares. The UFC star will then do some work on his core and stability before heading home to do some more cardio. Then he’ll take a sauna. Only after all that will he eat for the first time that day. Because of his intermittent fasting and high level of physical activity, Lawler says he can be flexible about what he eats, but right now he’s opting to keep carbs low for ketogenesis. “Just so I’m using all different kinds of energy,” he says.

Lawler is passionate about the process of testing his body and loves to see the results of his hard work. “My body feels good,” he says. “It’s all about pushing it hard enough but giving your body chance to recover.” So, with just a few days left until he steps into the octagon, what are Lawler’s thoughts on the fight, and his opponent? “Bryan comes to fight,” he asserts. “He’s gotta a lot of savvy and he’s a tough individual, so I expect the guy to come out there and get in my face and try to take me out. But [laughs] that’s usually what happens in these fights, and people try to beat you up, and it’s my job to stop that from happening.” Undoubtedly, “Ruthless” Robbie Lawler is an entertaining fighter, but don’t be fooled, he’s in it to win it. “My style just happens to be one that’s entertaining,” he says. “It’s how I fight, so I’m not going out of my way to excite people, this is just how I fight and if people like it, cool, and if they don’t, whatever, I’m happy with who I am and that’s what’s most important.”

Train Like a UFC Star with this MMA-Inspired Worko…