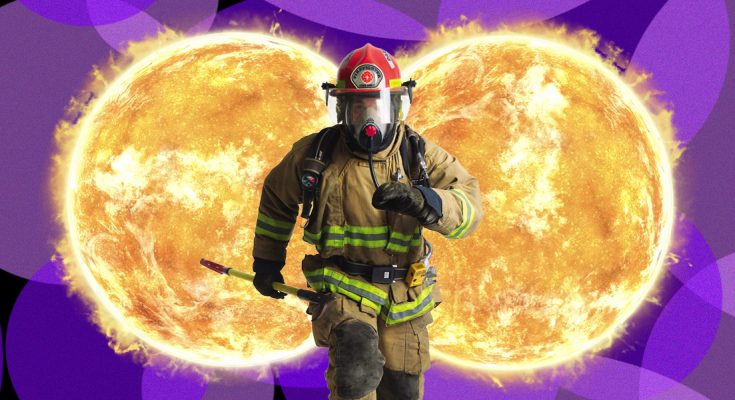 April is Testicular Cancer Awareness Month, and we’re grabbing it right by the balls. Every day for the entire month, we will be publishing a new story aimed at getting men to better consider — and cherish — their family jewels in hopes of helping prevent a diagnosis that, if caught early enough, shouldn’t prove fatal. Read everything here.

Seated comfortably at one of the large conference room tables inside of Bahama Fire Station 1 in Durham County, North Carolina, I was stoked for my very first day as an actual participant in the weekly firefighters’ drill session. Granted, volunteers weren’t permitted to fully participate until they’d completed four observational drill sessions and been issued their turnout gear, but I was downright thrilled just to be there.

It was at this point that Len Needham, the longtime fire chief of Bahama, stepped forward to temper my excitement by delivering some sobering news about one of the hidden risks that my volunteer duties would expose me to. “If you’re in a fire, you have to make sure you clean yourself off and wash your gear as soon as it’s safe to do so,” he admonished us. “Studies have shown that the smoke from the fire can get up into your gear, and that’s how you get cancer. A lot of firefighters are getting diagnosed with testicular cancer because the carcinogens are moving up into the turnout gear because of all that smoke, and then they’re not washing it off.”

Ed Brinson, the deputy director of the North Carolina State Firefighters Association, pegs some of the root causes for the elevated rates of testicular cancer in the fire service to a confluence of cultural, behavioral and societal factors that no one would have predicted to have been so consequential.

The first stems from changes made to the ingredients in the products that now fill American homes. “Everything in your home today has some type of synthetic or petroleum-based origin,” Brinson explains. “If you’ve been in the fire service a long time and been to many house fires or structure fires, you got used to seeing how the smoke coming out of the structure had a yellowish-grayish tint to it. When you saw that, you could tell that those were natural fibers burning, and the yellow tint was from the cellulose that was coming out of those fibers, along with starches. Now when you roll up on a house fire, the room is pitch black. That pitch black smoke is full of carbon and carcinogen particulates, based on plastics or some other synthetic materials. That’s what’s been giving us trouble with regard to cancer.”

Exposure to the noxious byproducts swirling about in those fires is bad enough, but firefighters haven’t helped matters by treating turnout gear soaked in smoke and marred by soot as a symbol of valor and evidence of time spent locked in head-to-head battles against towering infernos. “In my generation, that nasty turnout gear was a badge of honor, and we didn’t think twice about throwing it in the back of our car, truck or SUV and letting our families ride around in that same vehicle with it, potentially exposing them to it also,” says Brinson. “It wasn’t too long ago when I’d run calls during cold nights, and I’d take the dirty gear and throw it in the utility room right next to the kitchen or out to the laundry room because it was warm in there. We didn’t think twice about the danger that gear was posing to ourselves and our families.”

At the same time, Brinson considers himself fortunate to have been issued protective gear at all. “It has probably been within the last 25 years that the New York Fire Department began to use fireproof bunker pants,” he tells me. “Up until that point, their turnout gear consisted of a long coat, a pair of rubber boots and blue jeans. They had no protection whatsoever in the groin area. I can easily see why testicular cancer in the older generation of firefighters would have been so prevalent.”

Todd Leduc, a 30-year veteran of the fire-rescue system and the former executive assistant chief of Broward County, Florida, who now serves as the chief strategy officer of Life Scan Wellness Centers, clearly recalls the moment when national attention within the fire service became laser-focused on the soaring rates of cancer inside of its ranks.

“The seminal event for us was the publishing of the 2010 Niosh Firefighter Cancer Study,” he says. “They looked at more than 30,000 career firefighters and followed those firefighters throughout their careers while tracking their exposure, and their subsequent diagnosis of cancer. They were able to statistically show elevated rates of a number of different types of cancer. With testicular cancer in particular, they determined it was 2.02 times more likely in a firefighter than it would be in a male involved in another career.”

In his present role at Life Scan, Leduc develops implementation strategies for an organization that administers more early detection physicals for first responders than any other group in the country. Still, Leduc says that not nearly enough is being done in the way of early cancer detection for firefighters. “The International Association of Fire Chiefs has done some survey research showing that about 20 percent of paid departments weren’t providing firefighter physicals,” he explains. “That number was closer to 40 percent in volunteer departments. In volunteer departments, funding is always an issue, and they’re often relying on donations and the support of local communities to acquire things like second sets of gear, low-pressure hoses, decontamination wipes and other things that would help reduce cancer risk.”

Scarily enough, even when firefighters do receive physicals, there’s no guarantee that testicular cancer or any other form of cancer is going to be detected before it spreads unless advanced detection equipment is used. “A good friend of mine who is an assistant chief in the Alexandria, Virginia Fire Department had an annual firefighter physical, but because the physical wasn’t centered on finding cancer, they missed the fact that he had stage-three testicular cancer,” Leduc laments.

In fairness, Bryan Frieders, the president of the Firefighter Cancer Support Network (FCSN), says some cultural changes have been made since the first definitive report of accelerated cancer rates amongst firefighters. “In the past, before we highlighted it, most firefighters looked at cancer as an old person’s disease,” he tells me. “Well, when I have a 32-year-old father of four who has stage-four testicular cancer as a result of his occupation, people pay attention to that, and when organizations have members that are dying of cancer on a regular basis, they tend to pay more attention in general.”

For their part, among other things, the FCSN provides a peer-support network that pairs newly diagnosed firefighters with cancer survivors from within the fire service who can help walk them through the expectations and complications that routinely accompany a cancer diagnosis, along with an education program that empowers firefighters to become safety advocates within their own departments.

Yet, while some of the remedies are easy to come by — like cleaning gear, equipment and body parts early and often, and making sure fire vehicles and living spaces are kept free of contamination — other proposed solutions bring complications of their own. “One of the solutions that’s been discussed about the thermal protection and the skin protection is to encapsulate the gear so that there’s no possibility of intrusion of carcinogens inside of the turnout coat or the turnout pants,” Frieders says. “The problem is, firefighters get overheated very quickly. We’re already wearing or carrying anywhere from 100 to 300 pounds of gear on top of our body weight as we’re going into a structure, so not allowing our bodies to cool off at all creates another significant problem with the cardiovascular system. To add insult to injury, we’re learning that some of the materials that our turnout gear is made of may be causing us harm, too. They may be made with chemicals that are themselves exposing firefighters to cancer. So now we have to deal with that on top of everything else.”

All of which is to say, just as with their lives, firefighters’ balls have always been on the line, and that’s unlikely to change anytime soon. “The public has an expectation that we’re going to rescue and care for them in their time of need, and rightfully so,” Frieders says. “We’re never going to inhibit that — ever. This is a testament to what firefighters are all about. They’re willing to take on that risk, because they know that if they don’t, people will die. That’s not something we’re prepared to let happen, and we won’t allow it to happen.”