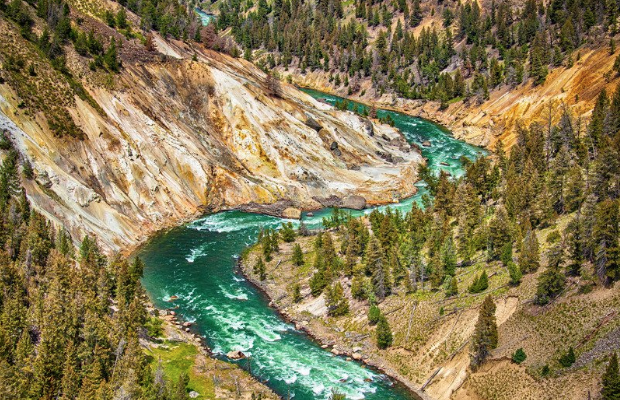 In Part 1, we explored how the wolf metaphor has been viewed as negative and how the introduction of wolves into Yellowstone National Park created positive changes that can offer us real guidance about how to heal mankind and humanity.

Mark Pirtle, author of Is Your story Making You Sick: Heal Your Story, Heal Your Life, Heal Your World, describes how the natural system of Yellowstone rebalanced itself after the reintroduction of wolves:

“Incredibly, reintroducing wolves even changed the geology of the park,”

“The abundant regrowth of vegetation markedly reduced erosion, which improved the quality of the water. More important, the protective blanket of foliage caused rivers’ banks to stabilize. The rivers meandered less, and channels formed and deepened. Those changes produced abundant pools, which further supported the industrious beavers. Even more livable habitats were the by-product. Such an awe-inspiring synergy was further boon to flora and fauna of all kinds.”

Pirtle points out that

“we humans live in a biosocial ecosystem. By almost every measure, our system is as out of balance and sick as Yellowstone was without wolves.”

There have been a number of books written about how the natural environment would improve if all humans were eliminated from the Earth and some feminists have suggested that the world would be a better place if we would just eliminate all the men.

I believe that a more realistic change would be to reintroduce what we might analogize to the wolf pack. I call it the enlightened men’s group. I have had the good fortune of being in such a group that has been meeting together for forty-three years now and will continue for the rest of our lives. We are learning to heal the wounds that have caused us to be less than we could be and the benefits to ourselves, our families, our communities, and our world, when we stop being “lone-wolfs” and become an enlightened men’s group.

For me these statistics were always up close and personal. A friend of our family died by suicide when I was four years old. His name was Holly. I remember him as a fellow writer like my father and he used to tell stories of writing for the emerging television industry in Hollywood. When I was five years old, my father took an overdose of sleeping pills. He had become increasingly depressed because he couldn’t find work and he despaired that he couldn’t support his family. Though he didn’t die, he was committed to the state mental hospital and our lives were never the same.

I grew up wondering what happened to my father, when it would happen to me, and what I could do to help myself and other families. When our first son was born on November 21, 1969, I made a promise that I would be a different kind of father than my father was able to be for me and do everything I could to help create a world where fathers were fully healed, healthy, and involved with their families throughout their lives.

In 1970 I developed the idea for MenAlive, a place where I could bring together the research and knowledge about what caused men to live sicker and die sooner than women and how we could work together to change that.

Over the years we focused our attention on a number of important areas of men’s health that we learned could be improved. Helping men live longer and healthier lives not only was good for men, but also for the women and children that loved them. I reported what we had learned in a number of books including:

Looking for Love in All the Wrong Places: Overcoming Romantic and Sexual Addictions. Many men have grown up with a distorted love map that turns healthy love into love addiction. This book helps men heal.

The Irritable Male Syndrome: Understanding and Managing the 4 Key Causes of Depression and Aggression addressed the increase in male anger, aggression, and depression and how men could heal.

Male vs. Female Depression: Why Men Act Out and Women Act In. After The Irritable Male Syndrome became an international best-seller, I wanted to study male depression in more depth. I want back to graduate school and earned a PhD in International Health. My dissertation study examined the underlying causes of male depression and developed a new scale for assessing depression in men that allows for earlier intervention and prevention. The book Male vs. Female Depression is a book version of my 7-year study.

Stress Relief for Men: How to Use the Revolutionary Tools of Energy Healing to Live Well. With increasing stress levels for everyone, we know that helping men deal more effectively with stress can help save lives.

My Distant Dad: Healing the Family Father Wound is a memoir that examines my own losses in childhood, my father’s overdose of sleeping pills, how it impacted our lives, and the healing journey that saved my father and myself.

Healing the Family Father Wound: Your Playbook for Personal and Relationship Success guides men and women to heal their own father wound.

If you’d like more information about our Moonshot Mission for Mankind, please visit us at MenAlive. You’ll learn more about what we do as well as details about the Moonshot Mission.

The post Lone Wolves, Big Bad Wolves, and the Wolf Pack: How Our Moonshot Mission for Mankind Can Heal Humanity – Part 2    appeared first on MenAlive.