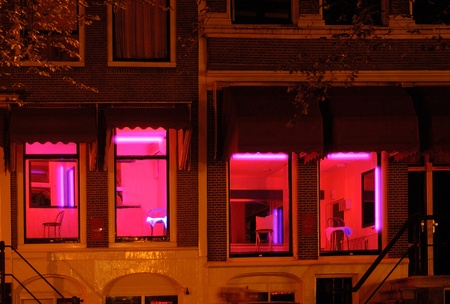 Today in my study abroad course on sex and culture in the Netherlands, we’re focusing on sex work, particularly the link between sex work and mental health.

Many studies have been conducted on the mental health of people (mostly women) who sell sex for a living. Most of this research has found that sex workers experience higher rates of depression, anxiety, and PTSD than the rest of the population. However, virtually of all of this research is based on studies of sex workers who live in countries where prostitution is illegal.

So what about places, such as the Netherlands, where sex work is permitted under the law? Do sex workers tend to have better mental health outcomes in these cultures? Research suggests that they do, but that working conditions matter a lot [1,2].

Women who work the streets, even in cultures where sex work is legal, experience high rates of mental health problems. This is due to the fact that those who work the streets tend to be in more dire financial situations (meaning they often enter prostitution as an option of last resort). They are also more likely to enter the profession to support drug habits and are at much higher risk of sexual violence due to the nature of this working environment.

By contrast, those who work in private studios tend to be much better off. In fact, in places where sex work is legal, sex workers’ rates of mental health disorders are no different from women in the general population [1]. Studios offer more protection from sexual violence and reduce the risk of sex workers being taken advantage of. For example, panic buttons are often installed in these rooms. Plus, others are often nearby to provide security and oversight. Those who work in studios (compared to those who work the streets) are far more likely to voluntarily enter the profession and to say they enjoy their work.

What all of this tells us is that it’s not necessarily the case that all sex workers are better off in cultures where prostitution is legal because working conditions and motivations for entering the job matter. They matter a lot. However, these results tell us that sex work is not inherently traumatizing. Many sex workers do enjoy their jobs and their mental health does not necessarily suffer because of it; however, this scenario is far more likely to be observed in places where sex work is legal than it is in countries where it’s illegal.

To get an inside perspective about what it’s like to be a sex worker in the Netherlands, my students and I are sitting down today with a Dutch sex worker at the Prostitution Information Center (PIC) for a seminar and Q&A (side note: the PIC is an organization dedicated to educating the public about the realities of prostitution–in other words, they’re ambassadors for sex work). If you’re ever in Amsterdam, I highly recommend stopping by the PIC and taking one of their tours because you’ll get information that you just won’t get anywhere else.