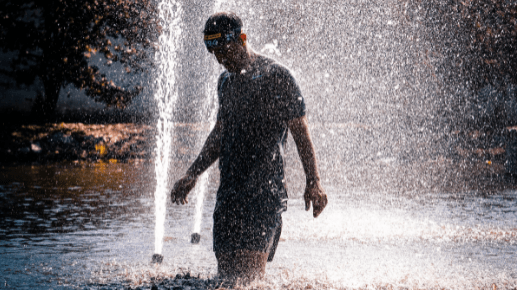 In part 1 I described the wounding Scott Harrison and I experienced and how it led to increased disconnection, anger, and violence. In part 2, I explored the connection between trauma in our families of origin and later violence in our lives. Here, I’ll delve more deeply into how violence towards women is related to the lack of clean water in the world.

One of the first clients I saw when I began my practice as a counselor was a man named Michael. He was a big guy with calloused hands, and the look of a man you didn’t want to mess with. He had been referred by the courts as an alternative to going to jail because he hit his wife. He was resistant and sullen through most of our initial sessions. “I don’t really have a problem,” he told me. “None of this would have happened if my wife hadn’t called the cops. She told them I had hit her, which wasn’t true. I hardly touched her.”

It took many months of counseling when he finally told me this story about his childhood. “My dad was a policeman and I loved him with blind devotion,” he told me. “I didn’t see my father a lot as child because he worked long hours and I was often asleep when he came home.” Michael was silent a long time before going on. “But when I did see him I would run to him and throw my arms around his neck as soon as he would come in the door.”

Michael’s face lit up for a moment as he continued.

“I remember a game we played when I was maybe four or five years old. I would climb up on a chair and yell, “catch me!” as I jumped into his arms, squealing with delight.”

“I remember the day it happened…” again the silence. But this time he had a slight quaver in his voice as he continued.

“I climbed on the chair as usual, yelled “Daddy, Daddy, catch me,” as I flew through the air with my arms outstretched…” Michael swallowed hard and looked across the room seeing a scene he couldn’t imagine. “But just as I reached out to him, he turned away and I hit my head on the table as I fell to the floor. I was stunned as I lay on the floor, my chin bleeding badly. He picked me up and put me on his lap and told me to quiet down.”

Michael’s words were steady. His eyes were moist and I had tears running down my cheeks as he repeated his father’s words. “Baby, boy, you have to learn…you can’t trust anyone in this life, not even your own father.”

Michael breathed a sigh. “I’ve never really remembered that scene until now. I just know that I never again reached out for him. Something died in me that day, or got buried. I don’t know.” Michael paused as he reflected. “There were other lessons along the way to toughen me up and make a man out of me. I just thought that’s the way it is…but I still miss my father and jumping into his arms.”

As I learned about Michael’s life, I began to understand the impact of childhood trauma on our lives. I also wondered what kind of childhood his father must have had believing this kind of behavior was what was needed to toughen up his son for life as a man.

Although I’ve worked with many men, women, and families over the last 52 years, I’ve worked mostly with men who have become irritable, angry, aggressive, and sometimes violent with their families. I’ve learned that every violent man I’ve worked with has experienced violence at some point in his life, most often in the family he grew up in.

Since 1969, the organization I founded, MenAlive, has helped more than 50,000 men, women, and families. I describe my own healing journey in my book, The Irritable Male Syndrome: Understanding and Managing the 4 Key Causes of Depression and Aggression.

How Male Violence and the Water Crisis Impacts Women

Healthy men recognize that our main role in the world is to protect and serve, but too few of us have a chance to make a difference worldwide. Too many women are impacted by male violence and the water crisis kills women. In talking to Scott about the work they are doing to bring clean water to the world, he made it clear that their work is not only to bring clean water to people throughout the world, but also to help save women and girls.

“We’ve met young girls who walk in the 115ºF heat of the Sahel Desert to collect water from 1,000-year-old holes,” he told me. “We’ve met women in Ethiopia who walk to the river before sunrise and don’t get back until after lunch. We’ve even met mothers in Mali who sometimes sleep next to an open water source so they can be first in line when the water refills the next morning.”

“This burden robs women and girls of time to learn, time to be a kid, time to earn an income, time to rest, and time spent with family. For hundreds of millions of people, being born female means life revolves around water collection. Everything else comes second.”

Even more than robbing women and girls of their time, it can rob them of their lives. “Every day, even when they are sick and injured, women have to make the physically demanding walk for water—returning with a 40-pound Jerry Can,” Scott says. “Often, they’re traversing dangerous terrain. We’ve heard heartbreaking stories of wildlife attacks, women falling off of cliffs in Ethiopia, and girls who can’t swim drowning in open water sources in Uganda.”

I learned that one of the most prevalent threats women and girls face on the walk for water is falling victim to gender-based violence. “We’ve met too many women and girls who have been subjected to horrendous acts of sexual assault: young girls like Grace and Sarah in Uganda,” Scott told me.

I cried when I heard about their story and thought of my own daughters and granddaughters. “The sisters walked to collect water for their family every day,” Scott said. “One day, on her way back from the lake, Grace was attacked by a group of men, and one of them sexually assaulted her. Weeks later, she realized she was pregnant. Grace was 14 years old. Not long after, her sister Sarah, on the same walk for water, was also attacked, sexually assaulted, and became pregnant.”

The results were heart-breaking. “Both sisters were forced to drop out of school and battled the stigma of being young, unwed, and pregnant in their community. It was a devastating and debilitating time.” Imagine if these were your sisters or daughters. What would you do to prevent this happening to them? But it doesn’t have to be like this. Clean water can save lives and men can help.

“Today, Grace, Sarah, and all of the women in their village no longer walk to the lake to collect their water,” Scott says.

“Thanks to our local partner in Uganda, GOAL, they have a well in the middle of their village that women can access without fear of being attacked by anything or anyone. Until everyone has this basic need met, women around the world will wake up every day and put their bodies on the line to collect water.”

For most of human history humans lived in balance with the natural world. We lived with clean air and clean water. Six thousand years ago, we changed our two-million-year heritage and began to dominate nature. What we did to the natural world we did to ourselves, women, children, and other men.

As Dr. Riane Eisler says in her book The Chalice and the Blade and more recently in the book, with Douglas P. Fry, Nurturing Our Humanity: How Domination and Partnership Shape Our Brains, Lives, and Future, “There are two large cultural configurations at opposite ends of a continuum: the partnership system and the domination system.” Our roots are in partnership and men can lead the way to return to our partnership roots.

Healing male violence has been my life work. I have a vision of bringing together a million men who are committed to healing male violence in the world, starting with a joint effort with Scott Harrison and Charity: Water. I’d like to see a million men come together to end the violence that has caused our disconnection from the earth and bring clean water to everyone. Like the million-man march that occurred in Washington, DC in 1995, I have a vision of a million-man march to end violence in the world. It would be a gathering of men who truly are ready to protect and serve.

If you’d like more information on how to join our efforts, please email me Jed@MenAlive.com and put “End Violence, Bring Water” in the subject line.

The post A Boy’s Trauma, A Man’s Violence, and How Two Men Plan to Heal the World – Part 3 appeared first on MenAlive.