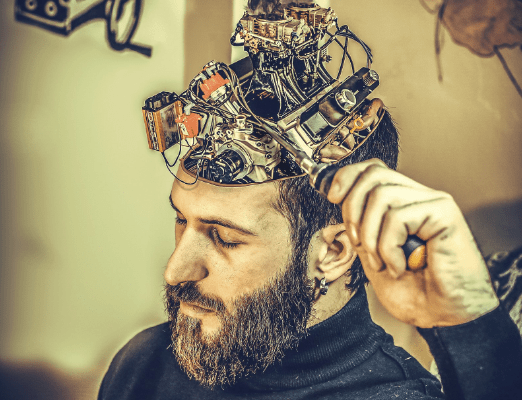 Part 2—What is Your Brain Type?

In Part 1, I talked about the different brain types discussed by Dr. Simon Baron-Cohen and learning that I had the Empathizing brain type that is more common in women. Both men and women have brains that can both empathize (E type) and systemize (S type), but females tend to be better at empathizing. Although empathizing helps make me a better counselor, and I’d like to think a better husband and father, I still wanted to try the test again to see if I could get more of the “manly” systemizing answers.

I retook both tests hoping there was a mistake. No dice. I still scored high on E and low on S. I have taken the tests many times over the years. No change. Of course, the fact that my empathy skills are very high makes me an excellent therapist and it’s not the end of the world that my wife knows more about fixing cars than I do…still, it’s not easy accepting the reality that I’m never going to be the next James Bond or win the favor of the voluptuous Pussy Galore (how did that name ever get past the censors?) played by Honor Blackman in the movie Goldfinger.

I hoped I would do better in the updated tests Dr. Baron-Cohen offered in his latest book, The Pattern Seekers. Here he has just 10 questions for each test:

“Based on our scores we can calculate our brain type,” says Dr. Baron-Cohen.

You simply subtract your E (empathizing) score from your S (systemizing) score which gives you a D (difference) score. In my case my S score was 0 and my E score was 18. So, 0 minus 18 gave me a D score of -18.

Dr. Baron-Cohen says there are 5 brain types as follows, along with the D score ranges:

Based on Dr. Baron Cohen’s research he found the following population results for each type:

Extreme Empathizers are rare. Only 3% of women and 1% of men fall into this group.

Balanced Types are equal between men and women, 31% of males and 30% of females.

Extreme Systemizers are also rare. Only 4% of males and 2% of females fall into this group.

The Ancient Roots of Our Systemizing and Empathizing Circuits

In his book The Pattern Seekers, Dr. Baron-Cohen says that the ability to empathize and systemize evolved in humans 70,000 to 100,000 years ago. The ability to empathize enabled our ancestors to understand what was going on in each other’s mind and allowed us to cooperate around shared beliefs, tell stories about our world, and helped us develop complex social interactions. Our ability to systemize helped us recognize the patterns in nature that formed the basis for using fire to cook our meals, agriculture, music, invention, sport, math, and science.

“When I get to heaven,” said the Hasidic rabbi Susya shortly before his death, “they will not ask me, ‘Why were you not Moses?’ but ‘Why were you not Susya? Why did you not become what only you could become?’”

The E-book of my international best-selling book, The Irritable Male Syndrome: Understanding and Managing the Key Causes of Depression and Aggression is on special this month. Check it out here. I look forward to your comments.

This was a longer article than most. I hope you found it helpful. You can read more of my work by visiting me at MenAlive.com/the-blog.