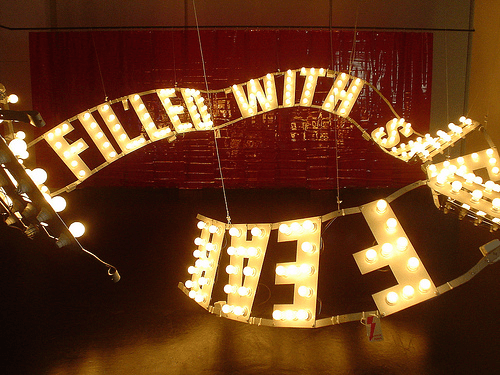 This morning, Carlin, asked me about the note. “Why didn’t you respond to the note?”

“I don’t know, I didn’t think it needed a response,” I said. I could feel my discomfort rising.

“Well, usually when I leave you a note, you at least acknowledge it.  I’m upset about your leaving the door unlocked, but even more upset that you just ignored my note,” she said.

I thought to myself, “Damn, what’s the big deal here? Why’s she getting on my case?” but I bit my tongue and didn’t say anything, though as usual I felt like I was being chastised by the school principal. These exchanges often lead to a fight or an emotional chill where we both withdraw and we both end up feeling hurt and misunderstood.

But Carlin, continued, and said something that broke the ice and lead to a greater connection between us. “It’s really scary for me when I come home to find the door open,” she told me. I could hear the fear in her voice. “I go around the house wondering if there might be an intruder inside. It’s really creepy.”

As soon as Carlin talked about her fear, I was able to feel my shame.  “Protecting you and keeping you safe is one of the most important things in my life,” I said. “When I feel I’ve let you down, I feel ashamed.” I took a deep breath, gathered my thoughts and continued. “I realize the way I often handle shame is to block out the incident and erase it from my mind. I really do understand your fear and will be sure to lock the doors before I leave for the day.”

It’s taken me a long time to understand the relationship between feeling shame and the way I respond with anger. I, like many men, often hear a woman’s unhappiness as criticism of him and her criticism as a personal attack.

How Men Unknowingly Frighten the Women They Love

When a woman tries to talk to her man about the ways he triggers fear in her, he is usually surprised. “I never hit her,” one man told me. “I can’t imagine why she could possibly be afraid of me.” Here are a number of the ways that men can, unknowingly, cause fear:

Men tend to be bigger and stronger than women.  Many women have grown up around males who could threaten and intimidate them just through their size and strength. A woman may not even be aware of the fear that may be present in her just being around a person who, if he chose to do so, could hurt her.

I often hear from women that when a man raises his voice, she feels fear. He may not even be aware that he is speaking any differently than normal. And he may be right. The male voice is low and can be menacing, without him even being aware of it. Like other male mammals, men are equipped to “roar.”  From the time we are little boys we compete with other males and demonstrate our superiority, partially, through the sound of our voices.

When my wife and I would get into a fight, even a slight one, she would tell me I would get “beady eyed.” She said it frightened her more than anything I would say. For the longest time, I had no idea what she was talking about.  I would insist that my eyes didn’t change. I was just looking at her, not doing something to frighten her with my eyes.

However, when I saw two boxers at the weigh-in getting ready for a fight, I understood what she was talking about. I realized that each boxer was glaring at the other, clearly trying to demonstrate his superiority and intimidate his opponent.

For most guys, anger is an emotion we know quite well. Many of us grew up around angry men. We played at anger when we were kids, roughhousing with our buddies. I can’t tell you how many times I’ve heard a woman tell me, “I can’t talk to him without him getting angry.”  While the man responds, “I wasn’t angry– I was just talking.” Clearly, men often don’t realize the extent of their anger or how it impacts the woman in their lives.

How Women Unknowingly Shame the Men They Love

Most of us don’t think of women’s size and power as shaming men. But all men have a body memory of being small, vulnerable, and totally dependent on a woman who is big, strong, and imposing. He may appear big and strong as an adult, but inside he still feels small and vulnerable. He never forgets that it was a woman who held his life in her hands, whose displeasure might cause her to abandon him to his death. This creates an inherent sense of shame that men feel when they are around women, but it’s a shame that neither the man nor the woman is conscious of him having.

Anthropologist David Gilmore has studied male/female relationships in cultures throughout the world. He recognizes this male ambivalence as being at the core of male/female conflict. In his book Misogyny: The Male Malady, he tells as that male anger towards women comes from his tremendous need for her and his shame at being needy.

There are, he tells us, “unconscious wishes to return to infancy, longings to suckle at the breast, to return to the womb, the powerful temptation to surrender one’s masculine autonomy to the omnipotent mother of childhood fantasy.”  Men long for the connection they had, or wished for, as children but are deeply ashamed of that need.

Men never forget that they must be chosen by a woman. They must compete with other men and constantly be trying to “get the woman he wants to want him.”  We all remember the terror of walking across the dance floor and asking the woman we want to dance. She could light up our life with a “yes” or crush us with rejection. If we won the prized woman, our battle wasn’t over. We had to please her and continue to please her or we might lose her to another.

When we feel we’ve pleased her, we feel elated. When fail to please we feel defeated. “Most women do not understand how much it pleases a man to please a woman, specifically how important it is to the man in her life to please her,” say psychologists Patricia Love and Steven Stosny. “Furthermore, a man does not simply want to please her—he lives to please her.”

Men are very vulnerable to women’s words. He is likely to cover his pain because he feels ashamed to admit that what she said may have cut him to the core.

Patricia Love and Steven Stosny remind us that “Words hurt. Words destroy. Words can kill a relationship.” In their book, How to Improve Your Marriage Without Talking About It, they detail some of the most common things that women say that trigger shame in a man including:

As with fear triggers in men, women often aren’t aware of the things they say that trigger shame in a man. Women are generally much more facile with words than men and are more used to verbal jousting. They often wound without meaning to because they aren’t aware of the power of their words.

Having a better understanding of fear and shame can help us break the cycle that harms so many men and women in their relationships. If you’d like more information, please visit me at my blog.

The post Why Men Frighten Women and Women Shame Men and How It Destroys Relationships appeared first on MenAlive.