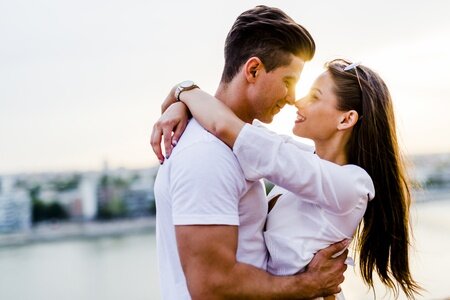 Have you ever noticed that some romantic partners have a strikingly similar facial structure? If so, you’re not alone.

Research has found that we tend to be attracted to partners with similar looks. For example, consider a study in which heterosexual participants rated the attractiveness of a set of facial photos [1]. Embedded in this series of images was a photo of their own face that had been digitally morphed into the other sex. Participants didn’t recognize the morphed face as their own and they actually rated it the most attractive of all!

Likewise, in a study in which researchers had real people and a face matching algorithm estimate the facial similarity of more than 500 male-female couples who had gotten married within the last two years, they found that partners’ faces were rated as being more similar than they were different [2].

Why is that? It might partly be a function of our broader tendency to be attracted to similar others. Multiple studies have found that we tend to be attracted to partners with similar attitudes and values, similar educational and religious backgrounds, and—apparently—similar facial structures, too. Similar traits might be attractive to us because we’re more familiar with them—and the more familiar something is to us, the more comfortable we are with it and the more we tend to like it.

However, it could also potentially be a function of people with similar traits and characteristics being more likely to wind up in similar environments and, therefore, to start relationships with one another. For example, in the United States, immigrants historically settled into environments where neighbors shared similar racial and ethnic backgrounds. Segregated environments like this might contribute to people starting relationships with partners who share certain traits, given that people are most likely to end up in relationships with people they live and work near (a proximity effect).

However, with the increasing popularity of online dating, we’ve actually seen a decrease in similarity among partners in terms of education level, religious background, race/ethnicity, and other characteristics because of the expanded dating pool. This would suggest that, as online dating becomes even more common, we might see even less physical and other similarity among partners in the future .

Previous research suggested that romantic partners’ similar appearance grows the longer they’re together. For example, in one study, college undergraduates were asked to evaluate photographs of couples who were supposedly newlyweds or couples who had been together for 25 years of marriage [3]. What the researchers found was that participants rated the faces of older married couples as more similar than those of both newlyweds and randomly paired individuals. In other words, the facial pairs that looked the most alike came from actual couples who had been together a long time.

The authors of that study argued that this may be due to empathy. If romantic partners frequently empathize with one other and “share” their emotional states, this could potentially increase physical similarity by contributing to similar wrinkle patterns developing around the mouths and eyes.

However, in a newer and larger study in which researchers attempted to replicate this finding, they found no evidence that partners’ faces appeared more similar the longer they’d been together [2].

In other words, it seems to be the case that couples often share physical similarity in the beginning of a relationship, but they don’t converge and become more similar over the course of their relationship. In fact, if anything, this study found evidence for the opposite pattern: partners’ faces actually seemed to become less similar with time.