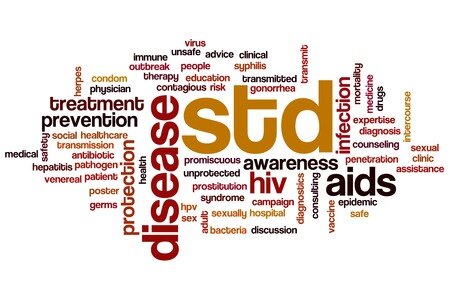 April is STD Awareness Month, so let’s take a little time to set the record straight on some popular myths about sexually transmitted infections and diseases. In this post, we’ll explore five of the most common misconceptions.

MYTH #1: You don’t need to worry about STIs if you’re only having oral sex. Many people don’t count oral sex as “having sex” and, therefore, don’t seem particularly concerned about using protection during this activity. However, the problem with this line of thinking is that several STIs have the potential to be transmitted through oral sex, including gonorrhea, chlamydia, syphilis, herpes, and HPV. Oral sex isn’t a risk-free activity, so if it’s something you’re engaging in, communicate with partners about their health status, consider the various forms of protection available (e.g., condoms, dental dams), and ask your doctor about getting tested for oral infections (e.g., throat swabs to test for oral chlamydia and gonorrhea).

MYTH #2: You can tell if someone has an STI just by looking at them or their genitals. Someone with an STI may appear perfectly healthy and be symptom free. However, this doesn’t mean that they can’t pass the infection along to you. While infection risk is generally higher when symptoms are present, many STIs can still be spread in the absence of symptoms, which is why a healthy appearance isn’t a reliable substitute for communication, protection, and testing.

MYTH #3: You cannot get the same STI twice. Just because you have had a given STI once does not mean you will be inoculated against it in the future. Being cured of an STI like gonorrhea, chlamydia, or syphilis doesn’t make you immune—indeed, many people have contracted the same STI multiple times, sometimes from the same partner. For example, if you got treated for an STI but your partner didn’t, they could potentially transmit it back to you later on, which is why it’s important that you and any partners you might have get tested and treated if one of you is diagnosed with an STI. I should also mention that viral STIs, which are incurable, can have multiple strains. For example, it’s possible to contract more than one kind of herpes or HPV infection.

MYTH #4: You don’t need to worry about STIs if you’re using condoms. Although condoms are one of the best tools we have for protecting against STIs, using them consistently doesn’t guarantee remaining STI-free. For one thing, herpes and HPV are sometimes present on the body in places that aren’t covered by condoms, which means they can still potentially be transmitted during protected sex. For another, people make lots of condom-use mistakes that undermine their protective benefits. In fact, some research has found that as many as 51% of participants report that they sometimes waited until after they started having sex to put a condom on, and 45% indicated that they sometimes took condoms off before they were finished having sex [1]. A large number of people also report putting condoms on incorrectly and not inspecting the packaging and expiration date. These and other usage errors increase the likelihood of condom failure and disease transmission.

MYTH #5: Only “sluts” get STIs. Many people think they are not at risk of contracting STIs simply because they have not had “that many” sexual partners or because they practice monogamy. However, the reality is that you only need to have one partner to get an STI, it can happen the very first time you have sex, and people in monogamous relationships can get them, too (because cheating often occurs, and when people cheat, they often don’t use protection). At the same time, many people who have had multiple partners have never had an STI.

With all of that said, the fact that STIs exist is not a reason to avoid or be inherently fearful of sexual activity. There are risks associated with everything we do in our lives, from the foods we eat to the substances we consume to the activities we engage in, so sex isn’t unique in terms of having health risks associated with it. However, the good news about STIs is that we have highly effective tools available for preventing them. Also, many STIs are curable (e.g., syphilis, gonorrhea, chlamydia), and we now have several great tools for managing the incurable ones.

It’s important to be informed of the risks so that you can take appropriate steps to mitigate them, while still enjoying an active, healthy, and pleasurable sex life—and getting all of the great benefits that come along with sex, too, from stress relief to intimate connection to a boost in your mood.

Sex is good for us in all kinds of ways (learn more about the research on this here), so it’s important not to let fear of the risks prevent you from reaping the many rewards. With a combination of good communication, use of protection (e.g., condoms, dental dams, PrEP, the HPV vaccine, etc.), and regular STI screenings, you can take control of your sexual health in a way that minimizes the risks and maximizes the rewards.