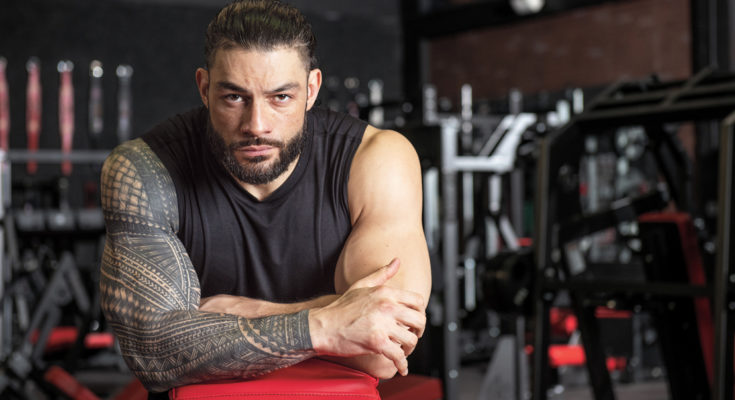 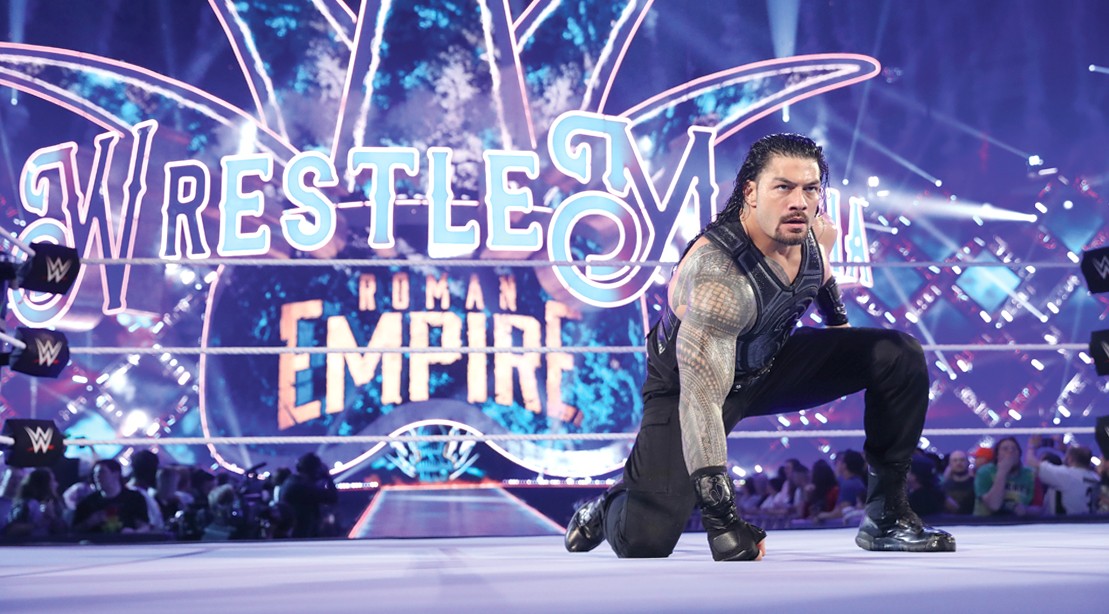 It was a storyline twist even the most astute WWE fans never saw coming.

On Oct. 22, 2018, Roman Reigns entered the ring in Providence, RI, uncharacteristically dressed in street clothes and greeted with a mix of cheers and jeers.  The reaction was to be expected. At 6’3″, 265 pounds, the strong, athletic, and ring-savvy half- Samoan, half-Italian bruiser had become one of the most polarizing WWE Superstars on the roster. Reigns—a six-time WWE champ who had headlined the previous four WrestleManias—had built a massive fan base during his six-year tenure. But there also were factions within the WWE Universe that viewed his main-event push as forced and used any opportunity to let him know it.

As Reigns stood in the center of the ring, mic in hand and the WWE Universal Championship belt draped over his shoulder, he took an extra beat before he spoke. He wasn’t there to goose the crowd or further a story angle, he was there to reveal that the man behind the character—Leati “Joe” Anoa’i, a husband and father of three—had leukemia and would need to step away from WWE for treatment.

“It was such a heavy moment,” he recalls. “If that was going to be my last 10 minutes out in that ring, I didn’t care what noises they made. I wanted to feel everything.”

Unscripted and partially scripted WWE bits can be memorable. (The Brawl for All tourney in 1998, CM Punk’s 2011 “pipe bomb” promo, and Edge’s 2020 return to the ring all come to mind.) But Reigns’ off-script monologue connected on a different level. It wasn’t someone with an ax to grind; it was a visibly rattled, healthy-looking 33-year-old athlete—a larger-than-life WWE Superstar at the top of his game—confessing that he’d been pulled into a fight with cancer for the second time in 11 years.

It was gut-wrenching to witness and a reminder that cancer is indiscriminate and something nobody can muscle his way out of—not even Roman Reigns.

Before he was “the Big Dog,” Joe Anoa’i was an athletic kid from Pensacola, FL. Though his family had deep roots in pro wrestling—’90s and ’00s WWE Legends such as Yokozuna, Umaga, and Rikishi are all part of the same bloodline (and though Dwayne “The Rock” Johnson isn’t technically related, they refer to each other as cousins)— he didn’t grow up privileged.

“There’s a huge misconception that I grew up with a silver spoon,” he says. “It wasn’t like that. I lived in a small one-story cinder-block home with three bedrooms and one bath.”

Joining the family business wasn’t even his first career choice. As a standout defensive tackle at Georgia Tech University who earned first-team All-ACC honors his senior year in 2006, Anoa’i eyed a career in the NFL.

He signed with the Minnesota Vikings as an undrafted free agent, but a team physical raised red flags about his health. Anoa’i was sent home, diagnosed with chronic myeloid leukemia (CML), a slowly progressing cancer of the body’s white blood cells that can hinder one’s ability to fight infections, control bleeding, and transport oxygen; he was released.

“I was 22 years old, and the carrot [of playing in the NFL] is almost in my hand, and it slipped right out. On top of that, my wife was pregnant…everything was falling apart. I felt like I was on an island with nobody to relate to.”

Treatment for leukemia can range from oral medication to chemotherapy to radiation to stem-cell transplants, based on severity. Anoa’i would be given a less invasive oral chemo, which sent his cancer into remission.  After trying to get his football career back on track, including stints with the Jacksonville Jaguars and a season in the Canadian Football League, he hung up his cleats for good in 2008.

“I thought I had some pretty good skills, but it just didn’t work out,” he says. “But I also believe everything happens for a reason.”

Being a WWE Superstar is a nonstop grind because the show never stops. Live shows occur around the country year-round three to four nights a week. Living out of a suitcase and being away from family and friends most weeks isn’t a schedule that suits everyone. But Anoa’i knew about life on the road before signing a WWE developmental deal in 2010.

“My father and uncle were quite successful [in wrestling], but they were living in the moment and having a good time,” he explains. “Thinking about the future wasn’t necessarily a priority.

“In this business, you can go from being on top to not having a pot to piss in, so you have to stay conscious of who you are, where you come from, and where you’re trying to go. You have to know what anchors you. For me, it’s my humble beginnings.”

Anoa’i’s work ethic was anything but average, so he spent two years learning the ropes at Florida Championship Wrestling (later rebranded NXT in 2012).

Outside the ring, he shed more than 30 pounds from his 300-pound football-playing weight and began training like a bodybuilder; instead of loading massive amounts of weight onto a bar, he sought to develop strength while improving his mind-muscle connection. (See the next page for more about Reigns’ training.)

In 2012, Reigns made his WWE debut. By 2014, he was positioned to take the baton from John Cena as the face of the company.

“I was born into this family tree for a reason—I’ve been groomed for this,” he says. “So I’m not surprised to see generational Superstars like me and my cousins [the Usos, a current tag team] gravitating toward the top.”

The upward trajectory continued as Reigns headed into the back half of 2018: His merch was wildly popular, he elicited strong responses during performances, and he looked bigger and stronger than ever—which made the derailment of the Reigns train all the more stunning in late October.

Four months after revealing his cancer diagnosis, Reigns made his WWE return: “I’m in remission, y’all!” he told the ecstatic crowd. As he eased back into a full-time schedule, all looked normal from the outside looking in. But on the inside, Joe Anoa’i had changed.

“Of course I think about the leukemia coming back,” he admits. “But I feel good and strong, so why not enjoy the moment?”

Post-remission he shot his first film, Hobbs & Shaw, with The Rock and began partnering with the Leukemia & Lymphoma Society to raise awareness and funds for cancer research. In the ring, he looked like he was having fun.

“Mid kicking ass, I’ll dap somebody up or fist bump them, because that hand might not always be out there,” he says. “I try to remember that it can all be taken away in the blink of an eye. So before that blink happens, I want to enjoy that moment.”

With WrestleMania 36 on April 5 in Tampa, FL, one moment he’d enjoy: reclaiming the WWE Universal Championship.

“That would solidify my comeback,” he says. “But if I’m answering as Joe? Being healthy enough to compete and making people stand up—that type of electricity doesn’t need a championship or main event. Just give me an entrance and let me have fun.”

Reigns Gives the 411 on LLS

Entertaining people is a blessing, but once I started feeling better I wanted to connect and truly help. I have seen how struggle can create camaraderie—some of the people I’m closest to is because we’ve struggled together. And then we fought and climbed to get out of that hole together. So partnering with the Leukemia & Lymphoma Society (LLS) was a perfect fit. It has raised so much money for research, but nobody knew about it. It was almost like a secret. And what better way to raise awareness and get the message out than to partner with WWE, which has eight hours of content each week?

Working with LLS has been incredible, especially on its Children’s Initiative. It’s important to save as many lives as possible, but if we’re not saving our future, what are we focusing on?

For more info on LLS or to donate, visit lls.org.

Together, We’re Tougher Than Cancer and the partnership between @WWE and @leukemialymphomasociety makes us that much stronger. Join our fight and help us find better treatment options for pediatric cancer patients. @wweshop 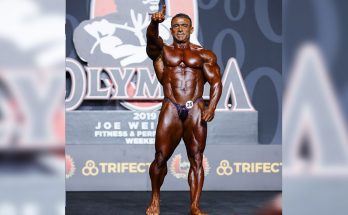 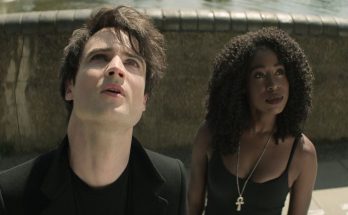