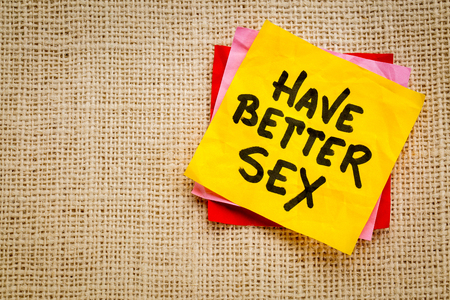 Each time a new year begins, a lot of people make resolutions for self-improvement. Some of us resolve to lose weight or to get in better shape, others vow to quit smoking or cut back on their drinking, and yet others aim to get their finances in order. As you ponder your own resolutions for 2020, here’s one more to consider: resolve to have better sex this year.

How might you go about doing this? Let research be your guide. Here are ten scientifically-backed suggestions for enhancing your sex life in 2020.

1. Be more vocal during sex. Research finds that the people who make the most noise in bed tend to be the most sexually satisfied. Why? Moaning and groaning help convey what you like and what feels good. By communicating this to your partner, it increases the odds that you’ll get what you want. Plus, these noises signal appreciation for a partner’s efforts and have the potential to enhance your partner’s arousal.

2. Experiment with sex toys. A lot of women and men say they have previously used vibrators during sex. Not only do people who use these toys tend to report greater sexual satisfaction, but they also report better sexual functioning. This is likely due to the fact that vibrators and other toys are an easy way of interjecting novelty and excitement into sex.

3. Do your Kegels. A lot of people think that Kegel exercises are only for women, perhaps because that’s who they were originally developed for; however, it turns out that the benefits of Kegels aren’t restricted to persons of one gender. Studies have found that Kegel exercises offer a wide range of sexual benefits to women and men. Research suggests that Kegels also have the potential to both prevent and resolve numerous sexual difficulties.

4. Remember hat “sex” isn’t just one thing. Research tells us that the more activities people engage in during sex, the more likely they are to have an orgasm. This is true for both women and men. Perhaps you’ve heard the old saying that “variety is the spice of life?” Well, these results suggest that variety just might be the spice of your sex life, too.

5. Watch how much you drink. Lots of people consume alcohol as an aphrodisiac—and alcohol can indeed stimulate sexual desire when consumed in small quantities. However, too much booze is a recipe for sexual problems. Being inebriated can create a range of sexual difficulties, including problems becoming aroused and reaching orgasm. Excessive alcohol consumption can also impair sexual communication.

6. Instead of going to sleep after sex, try spooning or cuddling. Research has found that, regardless of gender, the more time people spend on after-sex affection, the happier they tend to be with both their sex lives and relationships. This suggests that it’s not just what you do during sex that matters; what you do afterwards is very important, too.

7. Focus on quality, not quantity of sex. Most people think they’d be happier if they were having sex more often, but research suggests that this might not be the case. In a study in which couples tried to double the amount of sex they were having, those who forced themselves to do it more often were less happy in the end. When sex starts to feel like a chore—something we have to do instead of something we want to do—this undermines our interest in doing it. So don’t get so hung up on sexual frequency. Focus instead on making sure that the sex you’re having is good, which is something you can accomplish by adopting the other suggestions on this list.

8. Touch each other more often. Non-sexual, intimate touch is one of the keys to a happy and healthy relationship. Masters and Johnson discovered this long ago in their pioneering sex therapy work in the 1960s. They found that intimate touch can actually help resolve a wide range of sexual difficulties because it promotes relaxation, increases feelings of bondedness, and enhances communication. Learn more about the power of touch and ways you can incorporate more of it into your relationship here.

9. Try to be more “in the moment” when you have sex. If you aren’t in the moment during sex, there’s a good chance that you might find it difficult to stay aroused or have an orgasm. So how can you get out of your head? Consider mindfulness training. Mindfulness is based on Buddhist traditions and meditation techniques and it involves entering a state of present-moment awareness. It takes some practice to learn how to focus your attention like this, but it has been shown to help with a range of sexual difficulties. My go-to recommendation for assistance is Better Sex Through Mindfulness by Dr. Lori Brotto.

10. Talk about your sexual fantasies—and maybe turn some of them into reality, too (assuming they’re safe, sane, and consensual, of course). Research has found that couples who talk about and act on their sex fantasies are more sexually satisfied. Research also reveals that women who share and act on their fantasies have more orgasms, which suggests that getting in touch with our fantasies just might help us to close the orgasm gap! Don’t know where to start when it comes to sharing and acting on your fantasies? Check out my book Tell Me What You Want, which offers practical advice and information on communicating about your fantasies, while also describing the science behind where our fantasies come from and what they mean.

Here’s to a very happy and sexy new year!